Her Annuity Is Security in the Fast Lane

out in jet car racing, it was all about the adrenaline rush. At speeds of over 280 mph, Larsen has made a career out of going as fast as possible for five seconds down a straight and narrow quarter-mile track. So, to say she lives life at full-throttle is an understatement if there ever was one.

“Going fast is where I find my freedom. 5Gs? That’s just a Saturday,” she says. “Three hundred miles per hour? That’s where I feel normal.”

Larsen, a two-time International Hot Rod Association World Champion, didn’t take the same risks with her retirement planning, though. She locked down a protected income with an annuity to ensure that she and her husband Chris, co-owner of Larsen Motorsports, won’t face any surprises when she leaves the sport. 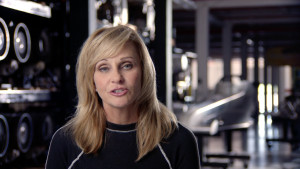 One day, her annuity will replace the racing parachute

Over her career, Larsen has had a handful of close calls, from parachutes not deploying to her car spinning sideways at 280 mph. But one incident in particular slowed down everything long enough for her to gain an entirely different perspective.

When a severe crash in 2011 left her with a shattered knee cap, broken ankle, cracked ribs and subdural hematoma, Larsen started to think about life after racing. Her husband was actually the person who extinguished the flames that engulfed her car.

“My focus changed from being the badass race car driver to thinking: What can I do to help inspire young girls to be as confident as me?” Larsen says.

The Larsens became major supporters of STEM (science, technology, engineering and math) curriculums, recognizing that the future of the sport depends on the next generation of young racers. However, she has a special place in her heart for young women looking to get into the rough-and-tumble world of drag racing. “I’m always out there scouting for the next Elaine Larsen,” she says. “I try not to scare them but I also try to educate them. I try to arm them with every single thing they could possibly need to succeed in what they’re doing.”

Her annuity provides protected lifetime income so she’s not only able to help maintain her current lifestyle in retirement, but she’s also able to experience new things. “I don’t think it’s going to be a sad day when I get out of the driver’s seat because I’m going to put a different hat on. I’m going to take my helmet off, and I’m going to replace it with a business suit.”

Larsen is the first to admit that when she’s behind the wheel of a jet car she’s never in complete control. However, she does have some reassurance knowing that her annuity can protect her income and fill her retirement income gap. “I want to take control of my destiny. I want to be the one who said, ‘I put money in there. I invested in this…I made the right decision, and now look how I’m living.’” 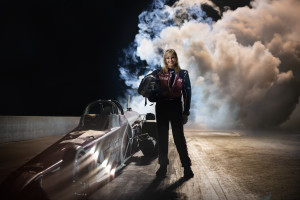